Green Screen, officially written as GREEN_SCREEN, is an international electronic band. Aside from boasting a team from all continents *and* from Tebríth, it is also somewhat unusual for never appearing in public. All music videos (including those shown on concerts) feature 3D animated characters, supposedly loosely based on aspects of the crew's appearance and personality. 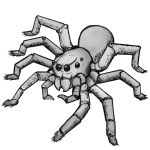